I realized that I haven't drawn for a long time already. I started this picture back in September but I never got a chance to finish it due to school work. I completely forgot about it until I cleaned my desk 2 days ago, and so I finished it just now. This is Happy Sir from Highs and Lows, hope you like it... 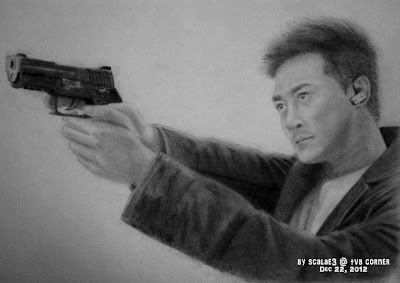 Lastly, Merry Christmas and Happy New Year everyone!!
Posted by scalae3 at 3:13 AM 1 comment: 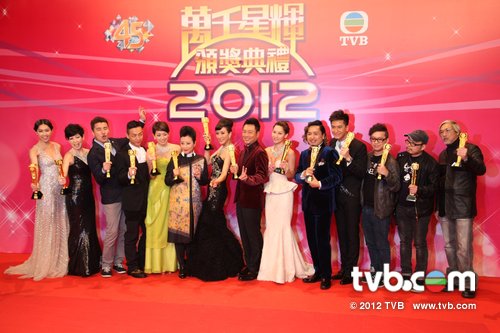 Overall, the results are quite satisfying. All the awards are evenly distributed among many series
The 3 most surprising results of the night:
1. Wayne Lai won Best Actor (for the 3rd time)
2. When Heaven Burns won Best Series
3. Raymond Lam went home empty-handed!!
Lifetime Achievement Award: Liza Wang 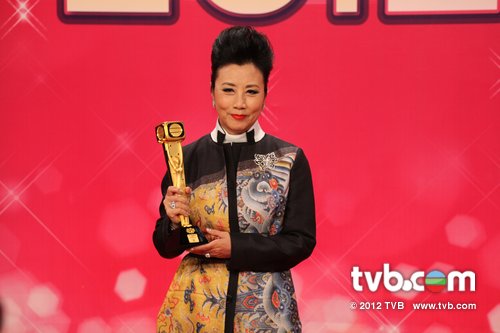 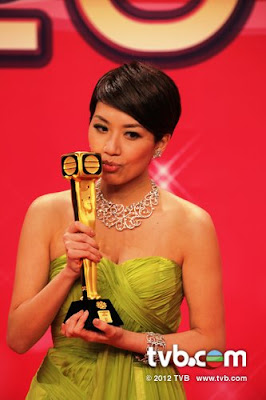 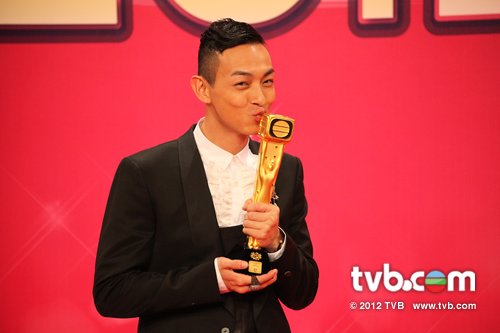 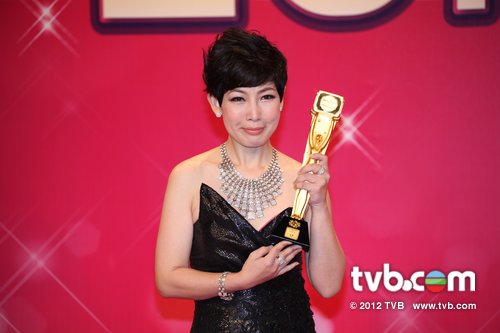 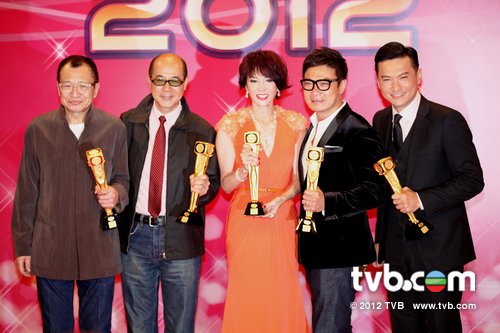 This is probably the best part of the awards show. Even though this is just pork, I do hope that TVB will keep this award for next year. It's very nice seeing them getting recognized for their hard work over the years. I'm especially happy for Benz Hui and Lee Sing Cheung. They are two of my favorite supporting actors, never tired of seeing them onscreen. Congratz!!
My Favorite Female Character: Kate Tsui as Chan Ka Bik (Highs and Lows) 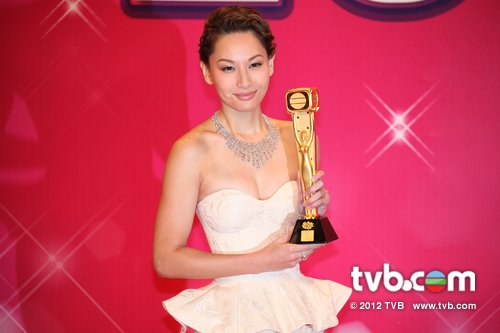 Kate: "The term 'most favorite' has always been really distant to me because there was a time I was disliked by the audience. I never thought that I would be liked by the audience. Thank you for the votes of 3000-4000 workers at TVB. Earlier when I was walking here, someone from the audio department reminded me to thank them because he said that everyone in the department has voted for me." Congratulations Kate Tsui!! It seems that the character Chan Ka Bik is the turning point of her career.
My Favorite Male Character: Kenneth Ma as Cheung Yat Kin (The Hippocratic Crush) 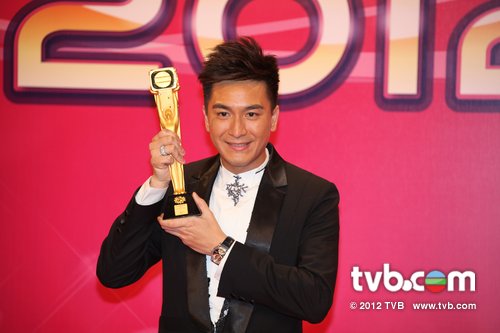 Kenneth: "I don't know since when everyone started to think that getting the Favorite award means that you're not getting the Best award, so everyone seems like they don't really want this. But I can tell you, if no one wants this award, I don't mind taking it every year." Ma Ming seemed shaky. I bet he was really nervous. Anyways, congratz Yat Kin Tau!!
Best Supporting Actress: Nancy Wu (Gloves Come Off) 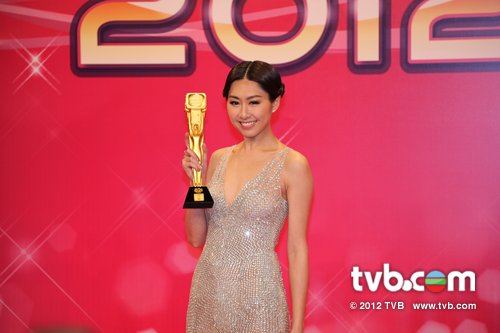 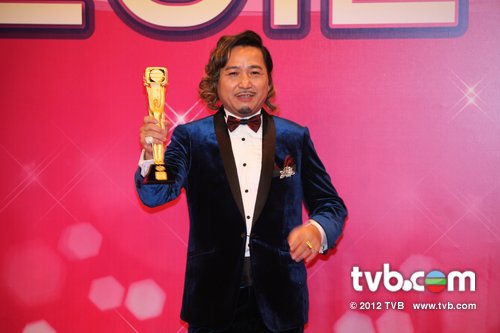 I was rooting for Power Chan but I'm fine with Koo Ming Wah winning too. Afterall, his So Gei has generated such an uproar in HK. It was very kind of Koo Lou to ask Power if he had anything to say when they were on stage together, very humble!! I feel that every year I'm always most satisfied with the winning in the Best Supporting Actor category. This is a good sign :)
Best Informative Program: Pilgrimage of Hope 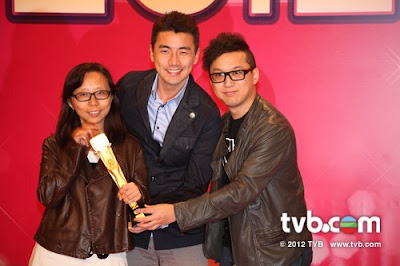 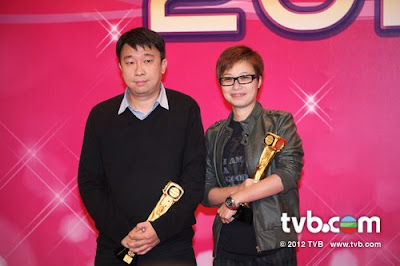 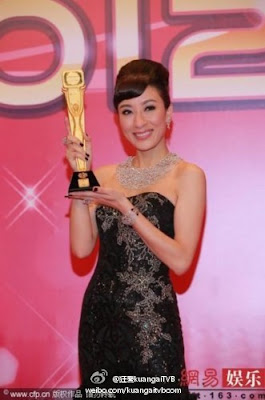 (Top 5: Charmaine Sheh, Linda Chung, Kate Tsui, Tavia Yeung, Michelle Yim)
Expected Tavia to win and she won. Congratz Tavia, your hard work has really paid off!! I love how the moment she heard her name, she burst into tears. And I also love how Elena Kong and Mary Hon came down to hug her. Elena was crying too. Such a loving Chung family. The camera was purposedly focused on Him Law many times and I also saw he had tears in his eyes. Him Him is so emotional ~~ too bad Tavia didn't mention him, but oh well...
Best Actor: Wayne Lai (The Confidant) 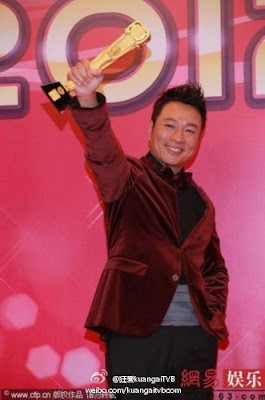 (Top 5: Kenneth Ma, Moses Chan, Raymond Lam, Damian Lau, Wayne Lai)
Congratz to Wayne for his third time winning Best Actor, that makes him equal to Gallen Lo. This result actually came out quite surprising, since I was expecting Raymond to take this. But in the end, it seems that Wayne's fan base is larger. Or am I just underestimating him this whole time? As for me, I go by the motto: When you don't know who to vote for, go for Wayne!!
Best Series: When Heaven Burns 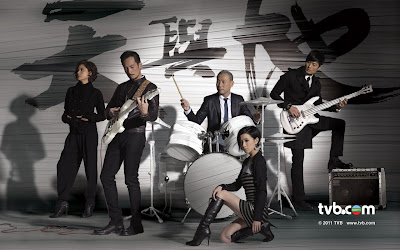 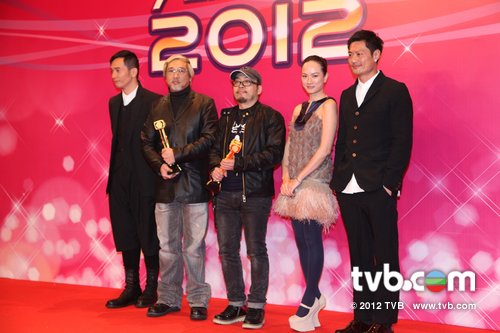 (Top 3: When Heaven Burns, The Hippocratic Crush, The Confidant)
You have no idea how happy I was when WHB was announced Best Series!! This is probably the most shocking win to most people, as WHB has the second lowest ratings in 2012, moreover, it was aired a year ago. Too bad that most of the casts were not there in the awards show, and Chik Ki Yee and Chow Yuk Ming were probably shocked too since they didn't say much either. Anyways, it's nice to know that so many people supported WHB. Very deserving win!! 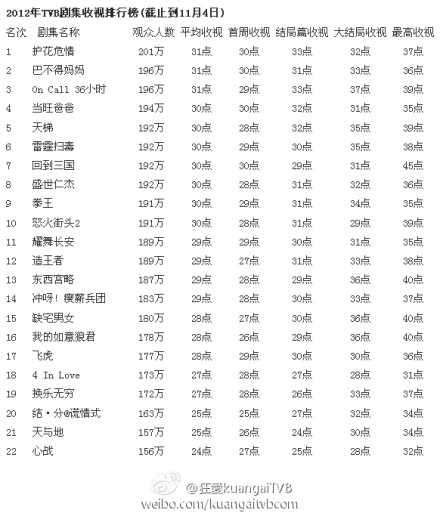 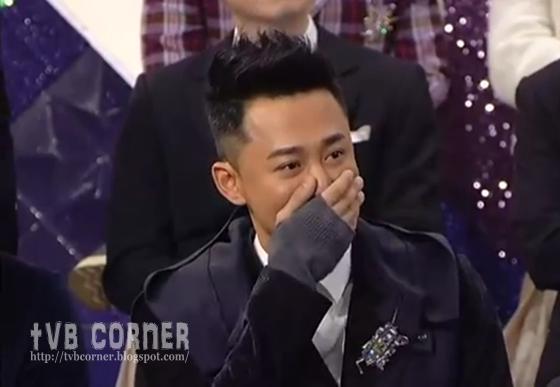 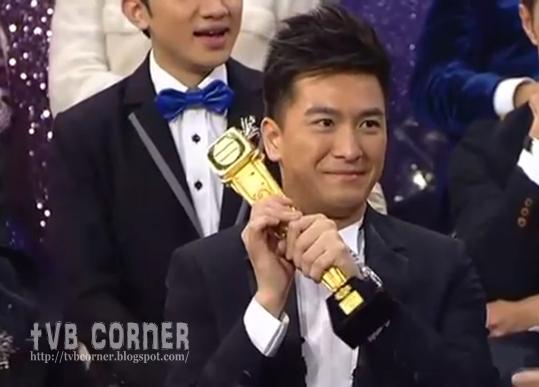 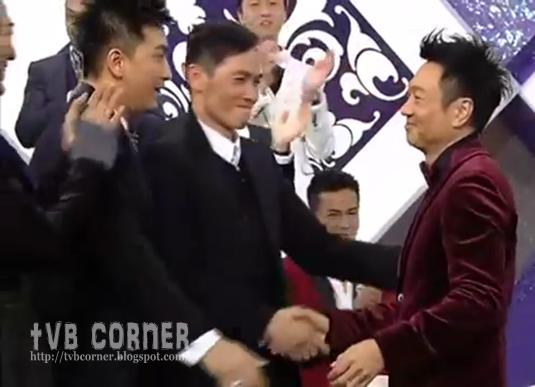 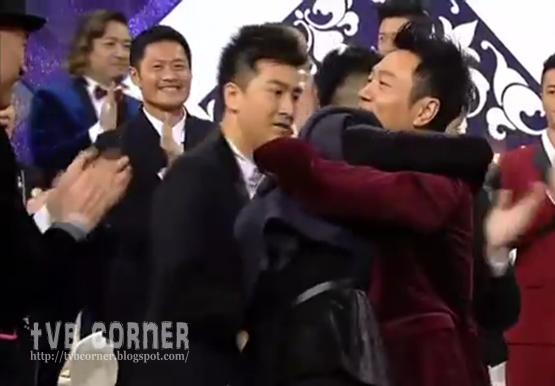 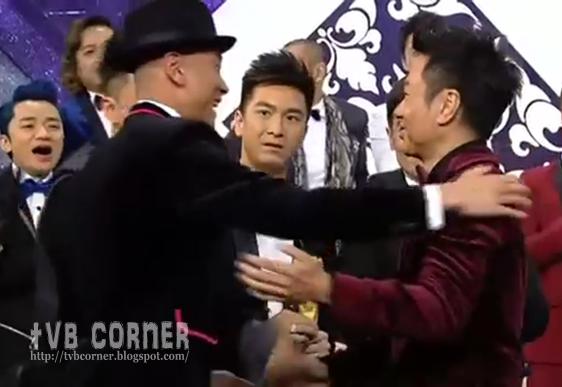 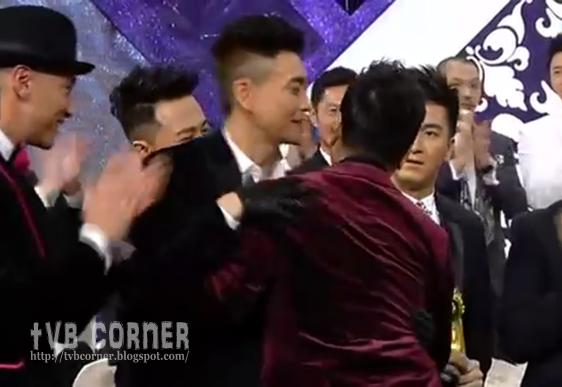 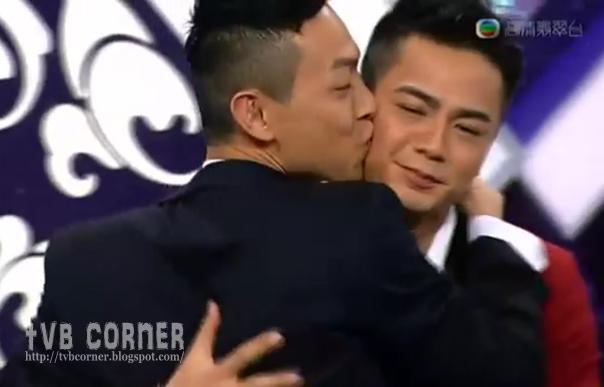 Continue from the last post about slapping scenes in TVB drama. I was hoping for a male version, but since there's none at the moment, let's enjoy the famous slapping scene from Silver Spoon, Sterling Shackles.

So currently Vincent is holding both the records of slapping and getting slapped the most!! And all the slaps are on him ~~ poor guy =.=' he must have offended the scriptwriter and director.

A compilation of slapping scenes in TVB drama. Enjoy ~~
﻿

- Person who slaps the most: Kingdom Yuen (11 slaps)

- Most continuous slaps: Kingdom Yuen in The Beauty of the Game (10 slaps). Poor Christine Ng ~~

I guess it's tough being a TVB actress eh?!

Hopefully someone will do a male version soon. Damian Lau and Vincent Wong will definitely be in it.
﻿
Posted by scalae3 at 3:18 AM 6 comments:

Unlike in the Most Improved Male Artiste category, I see no competition here, at all!!

Eliza Sam
- Eliza showed potential as an actress in her first major role in Divas in Distress. She did fine for her part, though her acting is still very raw and seems to be overdramatic sometimes. However, considering that it was only her second time acting, she deserves praises. Eliza can wait a year or two so she can try out different roles first before she can get Most Improved.

Christine Kuo
- Christine was in 2 series this year and she was horrible in both series. The fact that she ruined a big chunk of Ghetto Justice II and Tiger Cubs was enough for me to avoid her series in the near future. She should improve her Cantonese and try to control her voice in those crying scenes. Maybe then she will become more tolerable. As for now, Most Improved?? Nahh!!

Mandy Wong
- Mandy shows diversity in her acting, although she seems to be more comfortable in those strong female roles. Nonetheless, her acting is consistent and she is the strongest one among the 5 nominees.

Cilla Kung
- Cilla seems to be stuck in those little sister roles, which is starting to make her acting dull. Cilla this year seems no difference from Cilla last year. In fact, last year she still managed to impress me with her short appearance in Forensic Heroes III. This year, none of her roles so far really captures my attention. As for Most Improved, she can wait.

Katy Kung
- Katy is another actress that I think has potential. However, so far she also seems to be stuck in one type of character. She is very young (just turned 23) and still has a lot of time to improve and try different roles. She's in no rush of getting this award.

There is someone else that I think should have been nominated in place of Christine Kuo and that is JJ Jia. JJ is in a lot of series this year and I think she is decent as an actress, at least more tolerable.

Winner: Mandy Wong
- I don't think anyone will have problem with Mandy winning. This is her year. In fact, I would be really shocked if Mandy won't win.

Poll from TVB Forum
Posted by scalae3 at 3:27 AM No comments:

Hi everyone! Welcome! This is a place for discussions, reviews, thoughts, comments on TVB series and artistes. Hope everyone enjoy!

Disclaimer: This is only a fansite dedicated to TVB. It is not affiliated with TVB or any artistes. All materials are copyrighted to their rightful owners. All rights reserved.

If you want to re-post anything, please give proper credits back to TVB Corner. Thank you!